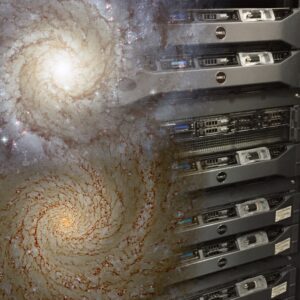 Our group’s interests range from cosmological scales, where gas and dark matter cluster together to display the overall structure of the universe, down to the dust grains circling an individual star that will one day give birth to a planet like our own.

The Universe contains an almost impossibly huge number of galaxies, and studying what shapes their properties and statistics is key to understanding the place of our own galaxy (the Milky Way) in the cosmos. Researchers in our group employ highly sophisticated numerical modelling to study such problems (Prof Okamoto), including why galaxies exhibit specific structures in their dark matter content, how the energy from stars is delivered back into the gas from which they formed, and ultimately building a more complete picture of galaxy formation in our Universe.

The shape and structure of individual galaxies is also a key issue. Galaxies tend to exhibit a wealth of different structures; some containing clear spiral patterns, while others seemingly featureless. Exactly why these features exist remains a standing issue and is the main field of research of a number of our members (Dr Pettitt). The exact nature of the stellar content of a galaxy and how a given galaxy has interacted with its neighbours both likely play a role. Whatever controls these processes is responsible for the myriad of shapes that are seen with modern observational facilities such as the Hubble Space Telescope and ALMA, which ties in directly to the work done by our observational counterparts at Hokkaido University.

On much smaller scales our work explores the formation of star-forming clouds of gas in galaxies similar to our own Milky Way (Prof Habe). These stellar nurseries control how and when stars are formed, making their own creation and life-span the controlling force in lighting up a galaxy. Interactions between these clouds may also be related to the production of our Galaxy’s biggest stars; fiery beacons a hundred times more massive than our own sun. Should two gas clouds collide, gas can pile up to create a dense reservoir of star-forming material that can perhaps collapse to form a star larger than those born in calmer conditions.

Our research uses computer models to follow the changes in gas, stars and dark matter that would be impossibly complex to do through a brute-force ‘by hand’ approach. Within our group, several different computer modelling techniques are used. In one method, the gas is mapped to a grid (adaptive mesh refinement, or AMR), where the fluid properties are evolved from grid cell to grid cell. In another, the gas is instead represented by particles that move freely through space, tracking the fluid motion as they go (smoothed particle dynamics, or SPH). More modern techniques use a somewhat hybrid approach between these two, offering many of the advantages of both. However you decide to treat the gas the gravitational force dominates astrophysical scales, and so the self-attraction between all the elements of your simulation must also considered (e.g. N-body techniques). The members of our group use a number of cutting edge codes that adopt these methods: ENZO, PHANTOM, GIZMO, GASOLINE, both improving and applying them to a wide range of different astrophysical problems.

The calculations we perform make extensive use of the national facilities at the Center for Computational Astrophysics (CfCA) hosted by the National Astronomical Observatory of Japan. The ATERUI II XC50 (with 1,005 nodes or 40,200 processors) machine at the CfCA has the best performance (2.1 Pflops) in the world for a supercomputer dedicated to astronomy, placing the system 181st in the Top500.